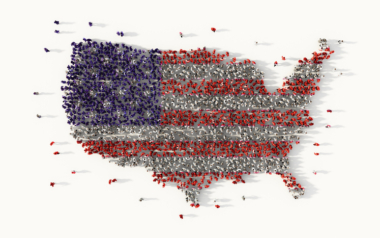 When we extract customer impressions of our client’s products and services, we embrace the beauty of meaningful data.  Similarly, as conversations turn to politics – as they oftentimes do in today’s contentious times – sources of voter leanings get put into the spotlight and we embrace those as well.

Recently, the political conversation has been pivoting to the electoral college and the likely outcome of it in 2020.  This was the key mechanism in the last presidential election, after all.  With a surgical focus in targeted precincts in key states along with a little help from social media mechanics, an election was won by tipping swing states by a sliver.

On this note, the focus of where things stand on a state by state basis is truly key to understanding the likely outcome of the next election.  As we witnessed in 2016, the national polls are woefully inept in predicting the final outcome – even if they called it right from a total population perspective, they did not call the electoral college outcome correctly.

To survey this, one can use aggregated data trackers that look at each state.  The coolest new source I’ve found is here where you can pull a slider across time since January of 2017 to see state by state trends. Those key states that turned the election in 2016 of Pennsylvania, Michigan and Wisconsin have all changed quite a bit since the inauguration.  Each of these states have seen plummeting approval to the tune of 20% of more over the past 2 years.

So, we’ll keep tracking on a state by state basis this time around. The fact that things have also gotten grim in two bellwether swing states of Florida and Ohio also indicate a steep uphill battle for reelection.  Each of those states have also seen a 20% or more reduction in approval as well.  So, the work to get back into the voter’s good graces in those states in order to keep them in the win column is a huge job.

We’ll all still keep an eye on fun national snapshots like the aggregated poll-of-polls at Project 538 as it’s still interesting to see how all pollsters roll up there.  The fact that our current president is clearly the least approved overall in all polls since the end of World War II is fascinating.  As we get into 2020 and closer to November, watching for this number to dramatically change will be a daily preoccupation.

If you’ve got thoughts on political polls, feel free to share them with us.