I finally had a moment to look at my credit card statement, something I rarely do (but should), and found some enlightening facts.

I had been paying $40 a month on three services I had stopped using over half a year ago.  Stopped using, but not stopped paying. What a wonderful feeling when you realize that most of the services I trial are useless in terms of weekly usage. I would rather pay $5 to use it when I need it. The recurring subscription model requires close monitoring. There are some interesting tools starting to appear that manage this for you, and I guess I should pay for one of them so I can stop paying for other things I don’t use. 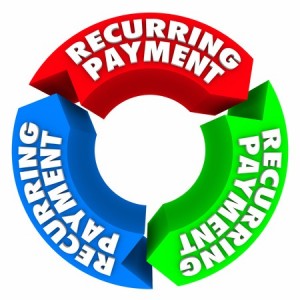 It used to be that I had to have the latest version of Adobe products.  But now that updates are served up almost weekly, I don’t feel the satisfaction of the new release and spending an hour upgrading with CD-ROMs.  But back then, I had the power of deciding if I wanted to spend the money to upgrade.  Now, the upgrades are built-in, and I can only decide to have it or not, regardless of what I’ve spent to date.

Of the services I do pay for, from content to social to apps, I’m setting myself up for over $4000 a year of usage. Meaning, when next year starts, I am already starting out in the hole financially.  And this amount is growing.  My Netflix subscription is now upgraded to four screens (damn kids!) and it will NEVER be paid off.  This is when models like Amazon Prime start to make sense, because the $79 / year offers so much more as a bundle.  Books, music, movies, and free shipping.  Time to say goodbye to the other streaming services and consolidate wisely.

Some of the things I pay for I don’t really know why.  One of my beloved services is LinkedIn, but they have the industry’s most convoluted pricing model.  I sat next to a co-worker and looked at plans, and there were completely different plan names and prices offered to each of us.  And what a person gets, let alone uses within a plan tier, isn’t clear.  I’m convinced my $30 / month really only gives me a badge on my profile.  Add to that that I just received a class-action lawsuit notice for a refund during a time period when certain features were offered to subscribers for a price but not made available. Bravo.

And this is the economy that millennials are entering into with fervor. Ownership has no value to them. That won’t be positive long-term, because we can’t get ahead of the cost-of-living without dropping subscriptions. And letting go of a Netflix subscription for a 4 year old is probably the worst thing you can do.

Is there a way to combat this subscription debt? Would love to hear your thoughts.

The good, the bad and the ugly… of customer service The Value of Internships – a Two Way Street
Scroll to top